You are here: Home / Uncategorized / Not the highchairs!

The video in my last post shows my two little children happily sitting in their highchairs. They may have been burping and laughing at themselves but at least they were sitting. Now they have figured out how to unbuckle themselves and stand up while eating which leads to:

Here is a picture of the one who started it all. I would have gotten a picture of both of them doing it but by then it was too dangerous for me to stand back and watch while taking pictures 🙂 And yes, those are Doritos on their trays, McKenna loves them and I was trying anything to get her to sit back down before the whole situation got ugly (this tactic obviously did not work). 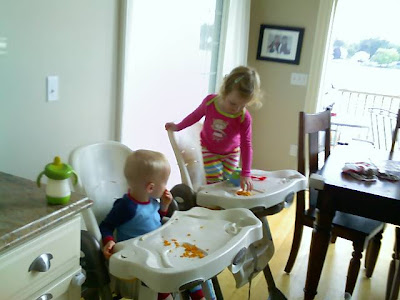 So now I am debating what to do next, small picnic table or booster chairs? Anyone have a booster chair they like best or other ideas for getting them to actually sit and eat at the same time???