You are here: Home / Uncategorized / Arts and Crafts
I feel like I never have time to do all of the crafty little projects I imagined I would be doing with 2 year-olds so yesterday I was determined to fit in something that resembled a project. I had big visions of a handprint project until the baby woke up early from nap. So, trying to salvage some sort of craft while entertaining a fussy baby, I threw some crayons their way and let them at it a stack of paper plates. I did manage to trace their hands and write their names and dates on the plates so we had something to show for our work.
They sat at their little table and McKenna colored so softly you could barely see the marks on her plate. Parker scribbled like crazy and then broke each and every crayon. I tried everything to get him to stop, taking the crayons away, giving him one at a time, only letting him use the ones he broke but ultimately he wasn’t satisfied until every crayon in sight was in at least two pieces. I finally asked him why we was breaking the crayons and he said “one for Parker one for Penna.” My sweet boy. (Penna= McKenna, everything has a “P” in it with these two, another post for another day)
So after dinner, feeling overconfident because we managed to do one semi-craft today I decided to break out the pudding for some finger painting. Ashlyn managed doling out the pudding and the kids had a blast. They actually made much less of a mess than I thought they would. There is no food-flinging when pudding is involved. Every glop that is not on paper goes directly in the mouth. I think Ashlyn was getting nervous as the pudding supply diminished because they were very clear in their demands for “more, more, more!”
I won’t be winning an award anytime soon for being the worlds most creative Mommy but I did manage to get almost everyone involved in the same activity… no one whined, no one asked to head back to their computer and Sawyer just sat happily on my hip waiting to get big like everyone else. 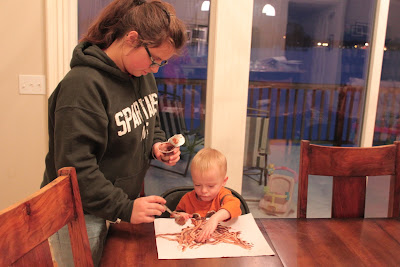 Ashlyn spooning out the goods 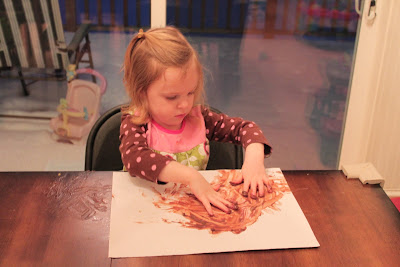 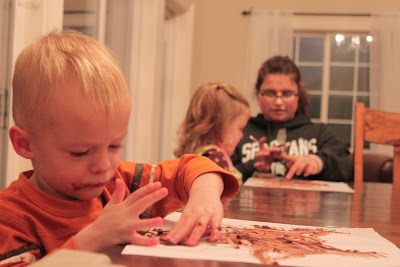