You are here: Home / Grief / Belonging

I think from the day we found out I was having triplets and I started researching what our new life would be like I had visions of toting three little ones around in the coveted Choo Choo Wagon.  Everyone with triplets has one, well at least everyone who bought one before they went out of production has one.  I could not wait to join the ranks of the gauked-at triplet mommies who had to use a Choo Choo.

Of course, my dreams of life and how we would live it raising three little people changed dramatically.  In the blink of an eye, two and a half years ago today, my future life as a triplet mommy, the one I had comfortably settled in to imagining, was gone.  Since we were blessed with our little surprise baby while our survivors where still babies themselves I was left oddly in search of some of the “triplety” items that I had once been so anxious to have and of course the Choo Choo was at the top of my list.

When I was pregnant with Sawyer I wondered how this would be, to need three of things again, things that screamed “I have triplets” because I don’t.

One of those little, no one told me about this, parts of being a loss mom is that you don’t exactly fit anywhere.  You are not a mom to twins so the local multiples group may make you cringe and you are not a mom to three living, breathing triplets either so you do not have as much in common with all those triplet moms that you used to talk to either.  Which brings me to the purpose of this whole long post.

After we lost Hadley I fell off the triplet mom planet.  I stopped using the triplet resources I used to use, I stopped talking with the group of triplet moms who I kept in close touch with during our pregnancies.  I felt like I did not belong with them anymore and was, of course, envious of the life they had.

One by one, every triplet mom who I had met along our pregnancy journey contacted me again.  Everyone felt terrible about our loss and no one thought for a minute that I was not worthy of still being part of the triplet mommy world.  They pulled me back into the loop and have supported me over the last two and half years whether we are on the same journey or not.

One of them even searched out and found the choo choo for me.

In there own way, they have each reminded me that I am just as much a triplet mom as I was before we lost Hadley and have helped me to heal more than they know.

So when we headed out in our brand new ride this weekend did I think of Hadley and wish we needed a triple wagon a year or two ago?  Of course I did, but I was able to blink back the tears and know that my new little guy was in her seat, not taking her place but definitely right where he is supposed to be.

It is nice to belong 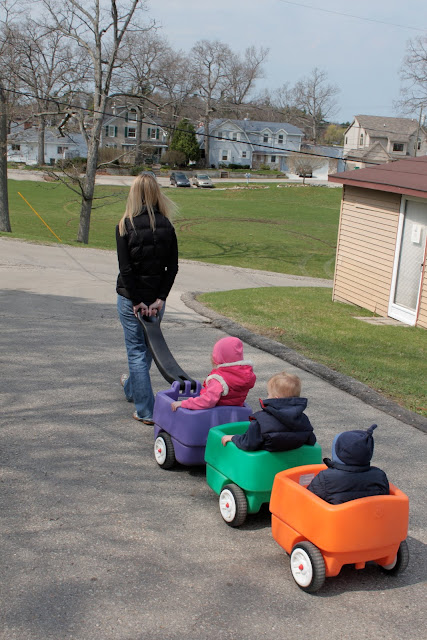