You are here: Home / Uncategorized / My artists

This morning I was playing with the kids in the spot where many a diaper disaster has occurred.  I will not go into detail about what our diaper disasters or diaper “art work” consist of but let’s just say we went through a phase where the second I was out of view the diapers where flying and soon after I was left disinfecting the room while trying not to gag.  Anyway, we were playing at the scene of past crimes and I thought to myself for a moment about how they have not done something gag-worthy in quite a while.

So since this thought crossed my mind just this morning you would think that, when it was time to put Sawyer down for a nap today and they were playing so sweetly together, I would have remembered that brief thought and that fact that I may have jinxed myself and not left them to play.
Upon my return from putting my sweet little, too-small-to-cause-trouble baby down for a nap I found that not only did they create another diaper disaster, the one who did not have to relieve himself drew on both the pooper and himself AND drew a line to the present left by said pooper just in case I did not see or smell it the moment I entered the room.
So no sweet, aren’t my kids cute picture for today.  Just a quick picture of the Crazies that I managed to take in between scrubbing the floor and sanitizing them.  Oh and the artwork does not stop here.  Mr. Artist also drew on two chairs, the kitchen table and a bowl. Pretty crafty, huh? 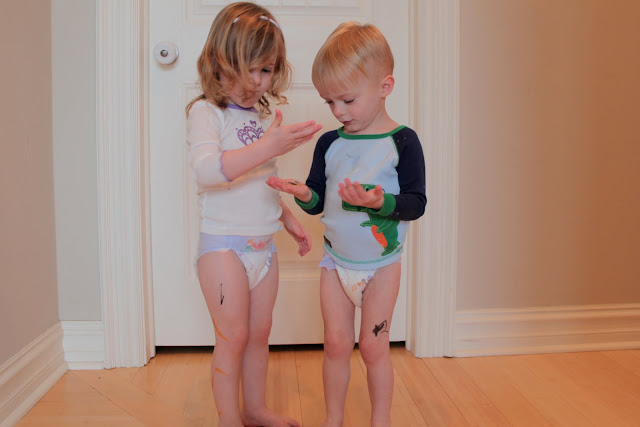