You are here: Home / Musings of Motherhood / A Potty Story

At some point last night, when my hands were more than full and no one was wearing a diaper, Parker announced that he had to go potty.  As any mom who has cleaned more than her fair share of pee off the floor would do, I told him to RUN to the potty.  McKenna followed behind him to supervise as always and just as I was wondering if the little boy pee shield was up on the potty, McKenna came out to inform me very seriously that “Parker’s pee pee did not go in the potty.”

I finished diapering Sawyer and headed in the bathroom.  As I was cleaning a smaller than usual puddle and Parker was emptying the two drops of pee that did make it into the potty into the toilet I looked up at McKenna who concentrating on the whole scene with her hands on her hips and a wet stripe going down her dress from her chest to her knees.

Apparently she was in the line of fire.

I wish, wish, wish the camera was in reach for a picture but I just couldn’t get to it.

Here is my picture for today but I had to cheat.  Today was not a good day.  My poor Sawyer was sick and miserable and the only time the doctor could see him was during our coveted naptime so everyone was either sick and crying or tired and crying ALL DAY LONG.  I kind of figured no one needed a sick baby/crabby toddler/frazzled mom picture today and found a cute one from the other day instead. 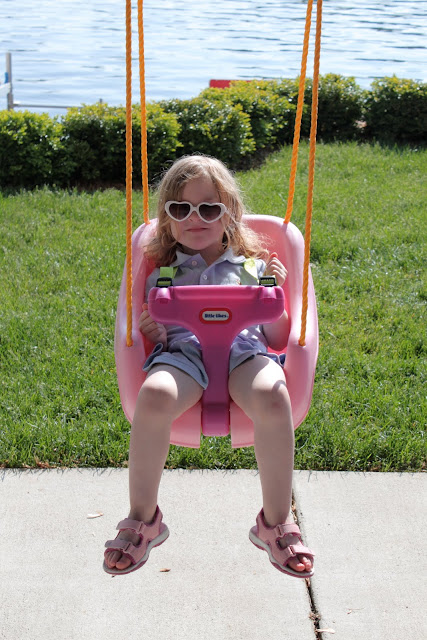 Keep us in your thoughts that the little sunglass-wearer does not get her brother’s virus.  The last time she was sick was when everything went downhill and she lost so much coordination and strength.  She is in rehabilitation now but doctors are still trying to find a diagnosis and until they do we really don’t know how her body will respond to another illness so I am hoping that we can keep her healthy!!!!