You are here: Home / Daddies / Craziness
To call the last week wild is an understatement.
Wednesday morning, Mark called bright and early on his way to work (he never does this, in fear that he might wake us on a day that the kids decide to sleep later than the crack of dawn).  What is it that causes them to wake so early as soon as warm weather hits?  In the winter they will sleep until 7:30 or so but the minute it starts getting warmer the whole house is up by 6.
Anyway, back to Mark’s call… apparently, while he was driving he heard an extremely loud noise and his entire sunroof shattered and came crashing down on him. 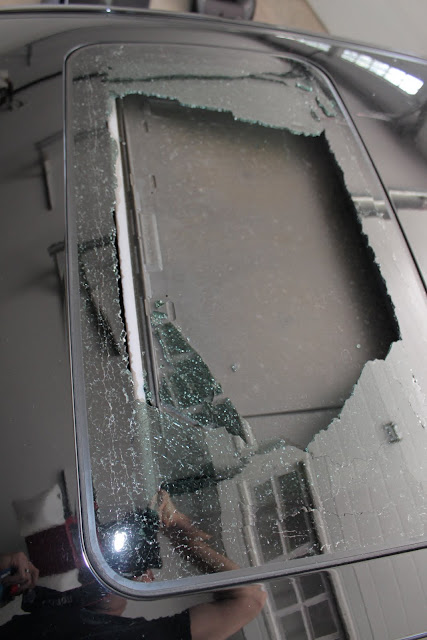 He was not hurt, or so we thought, so he came home, changed out of his glass-filled clothing and took the van to work.  By mid-afternoon he noticed he was losing vision in one eye.  He headed to the ER, while I stayed home with the kids freaking out that he had some sort of head trauma.
To make a long story short, after a night in the ER and two long days with an eye specialist, they finally found that he has a form of retinopathy caused by the pressure of the explosion of his sunroof.  Thank goodness he is fine and that laser surgery will hopefully correct the damage to his vision but can I just say that we are very tired of hearing “I have never heard of such a thing before” when it comes to things that happen to our little family.  Seriously, we have had one medical mystery after another for YEARS now and wouldn’t mind just a few, normal, run-of-the-mill months.
Speaking of medical mysteries, I realize it has been ages since I have updated on McKenna.  She is doing better than she was after her initial illness in March but still has poor coordination and strength in her lower body.  She was fit for braces on her legs last week which I thought was going to be a hugely traumatic event but ultimately turned out to be an “everyone is fussing over my feet and showing me new shoes and I love it” appointment.  So her braces should be in this week and my fingers are crossed that she continues to enjoy them as much as she did when she tried them on.  Most likely I will be posting next week about the fights that have ensued over her new shoes since these days ANYTHING that someone has someone else wants.  At least if they fight I know a timeout will be had since punishing her siblings is McKenna’s new talent.  I have caught her twice this week disciplining Parker and Ashlyn.  Here is her strategy in case anyone is looking for a new one:
McKenna (in a long drawn out tone) “No, you do not say that.  You have three seconds or you will go to time out.  ONE, TWO, THREE.  Now you go to time out until you are ready to say sorry.”
We have used counting to three, time outs and sorries but not all together, I think I like her technique 🙂
Of course, this sweet little boy will never need a single time out… 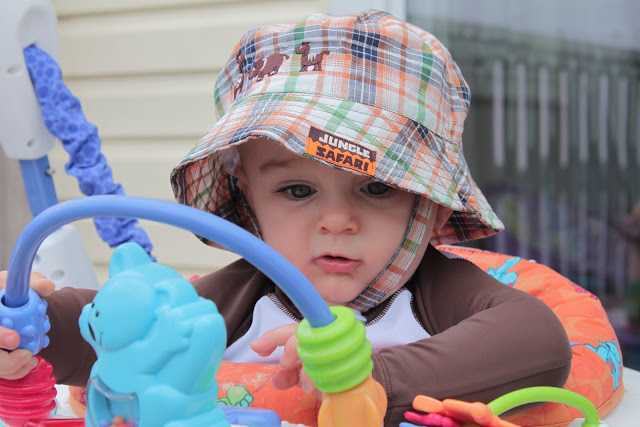 Especially with such an innocent brother to look up to… 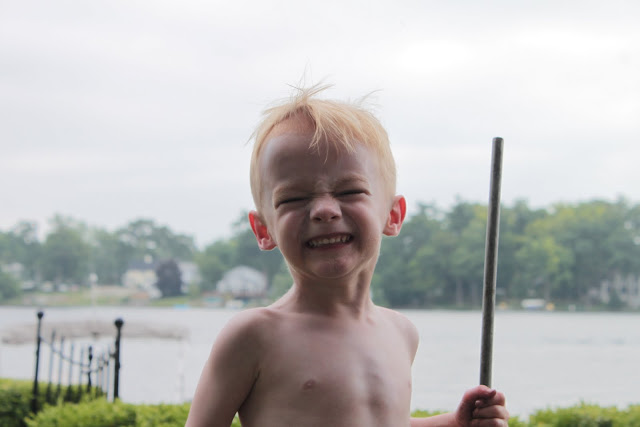