You are here: Home / Daddies / The Proposal

I had to do “Show Us Your Life” from Kelly’s Korner this week because I love the topic— Proposal Stories.

So here is how our fairytale 🙂 began…

After we had been dating for about a year, Mark took me to Chicago for Valentine’s weekend.  Our second night there, Valentine’s Day, we went out to dinner at a great seafood place and then ended up in a really neat, jazz bar with amazing live music.  There was a piano player and singer who sounded just like Frank Sinatra and we were having a great time dancing.

I have to stop here to brag for a second… among all of the other things he is good at, my husband is a phenomenal dancer.  He has amazing rhythm and can swing, salsa, waltz, you name it and is that guy who everyone is asking to dance with.  Me, not so much. I’m not bad (I don’t think) it is just not my favorite thing to do.  I think I have always been a little too self conscious to let it all go and just dance.  We always laugh about how I, one of the few women who doesn’t like to dance, ended up with Mark, one of the few men in the world who actually can.

Anyway, back to the Chicago… so we were dancing and “The Way You Look Tonight” came on and before I knew it he was down on one knee and we were the only two people in the world.  To this day I still have no idea what he said because the music was so loud (and he won’t tell me!) but I’m sure it was amazing and I do know it ended with “Will you marry me?”  I said yes of course, and the whole bar cheered and clapped for us.  Everyone came by our table to congratulate us and see my ring and since we didn’t have a camera, one of the waitresses took our picture with a camera they had behind the counter.

We called my parents to tell them and then headed to the top of the Sears tower.  When we got back to our hotel room it was filled with dozens of roses and champagne.  I still have no idea how he pulled all of this off without me suspecting a thing but it was an amazing night.

The next morning I sat at breakfast with a phonebook on my lap trying to find a jeweler in the area who could size my ring immediately.  I was determined to wear it, fitting perfectly on my finger, home.

We were married August 5, 2005 and it has been a whirlwind ever since… some may say more like a tornado or a hurricane but the one constant has always been how much we love each other.  We never could have imagined in our wildest dreams, where we would be today and the five years we have to look back on but I absolutely love him more this minute than I did the day we said “I do.”

Oh, and months went by after our engagement and we never did receive that picture the waitress took of us after we were engaged.  I was so disappointed.
Two years later, pregnant with the triplets, I received this in the mail… 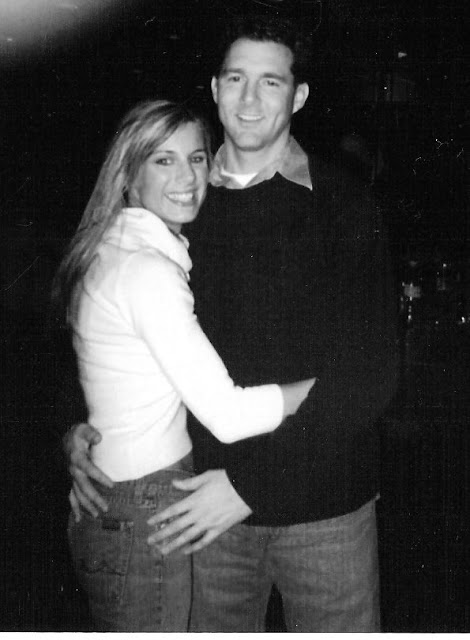 Mark and I right after I said yes 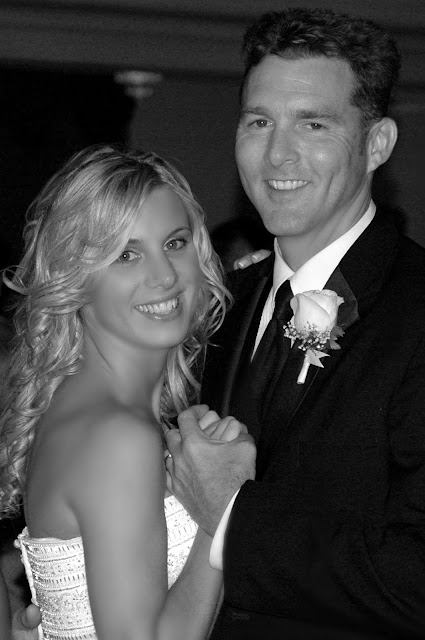