You are here: Home / Uncategorized / Clean up in aisle 3
These little shopping carts are a great idea,
for someone else’s children. 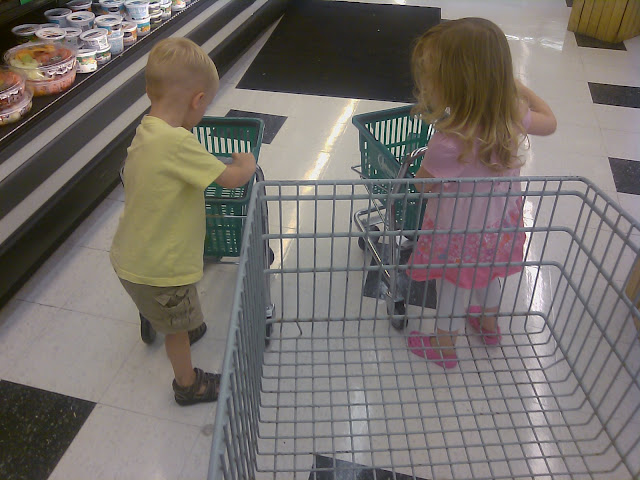 In a moment of temporary insanity I decided not only to take all of the kids to the grocery store but to let Parker and McKenna push their own carts instead of strapping everyone down like any clear-headed mom would have done.

I took the picture above after about 30 seconds in the store (notice the empty carts and the fact that I had a hand to snap a picture).  About 5 seconds later Parker took a quick right and decided we need a lime from the bottom of a fruit display.

Clean up in produce

Once I got them untangled from the limes and somewhat facing the same direction I made a beeline for the few items we needed but could not, for some reason, get us all moving in a straight line. (This, of course, was what I pictured when I decided to let them push carts.  Me, pushing Sawyer with Ashlyn helping to get the groceries while the Crazies followed happily behind us in a single file line, happily giggling every time we set something in their cart.  Delusional, I know.)

Anyway, I quickly gave up on getting in front of them and just did damage control from behind.  Before I could blink or actually shop, Parker was helping himself to a box of macaroni and cheese

clean up in aisle 3

and McKenna was turning down the next aisle carrying a foot long pre-wrapped sausage and a can of spray cheese.

My next strategy was just to get out.  I sent Ashlyn ahead of us to look for an empty aisle for us to go down so we did not continue to hold up traffic and just kept repeating “follow Sissy, follow Sissy, follow Sissy” until I was blue in the face.  Eventually I spotted a basket of suckers near the checkout, told Ashlyn to go pick a few up and wave them at us (she looked at me like I was insane but nothing could make more of a scene than we already had so she obliged).

With Ashlyn waving us to the finish line, the kids followed the sugar bribe and we made it to the checkout.  Parker unloaded launched the items from his cart onto the conveyor

clean up at check out

I swear I heard a cheer break out as the automatic doors shut behind us.

Back to grocery shopping at midnight I guess.  Now that they had a taste of grocery store freedom I will never be able to strap them in a cart again.