You are here: Home / Uncategorized / Mutiny
You know those days where you feel totally on top of everything?
You get to shower and brush your teeth before noon, come up with enough activities to keep your children from tearing apart the house and each other and even have dinner in the oven?
This is NOT one of those days.
The kids have declared mutiny on their mother.
There has been more trouble caused, messes made and kids crying than I could possibly tend to, clean up and settle down in one day.  I was wondering how exactly it got to this point today and then I remembered.
Here is just a small piece of the morning drama…
Sawyer woke up from his morning nap covered in a gag-worthy mess.
While mopping him up McKenna sauntered by stirring a glass full of water with the television remote. (spot clean the baby with wipes, leave the rest in pursuit of the glass and remote)
As McKenna cried over the loss of her concoction I heard the toilet flushing and found Parker “cleaning” the floor with a toilet brush. (grab the brush, throw it in the sink, make mental note to clean the floor and the sink)
By now it was lunch time, I herded everyone downstairs, Parker tripped on the gait (crying) so I put  Sawyer down (2 crying) and consoled Parker while McKenna’s declared she was getting a freeze pop.  “No freeze pops, McKenna” (and 3 crying).
In desperation I gave them each an empty two liter and a stack of plastic cups and tried to find something to feed them before the next disaster hit.  The two liters were not a hit. (couch cushions flew, the baby tried to get outside, McKenna found a new outfit from the dirty clothes)
We made it to lunch and while everyone was strapped in and eating massaging their food into the table McKenna’s doctor called and as I moved further and further from my screeching, squealing, whining children so that I could decipher a portion of the doctor’s instructions I was fully aware that the fate of my kitchen worsened the further I got from my children.
I ended the call as quickly as I could and returned to find that no one had broken out of their chairs because they were too busy launching chewed up food onto the floor.  I let everyone free and began to assess the damage. 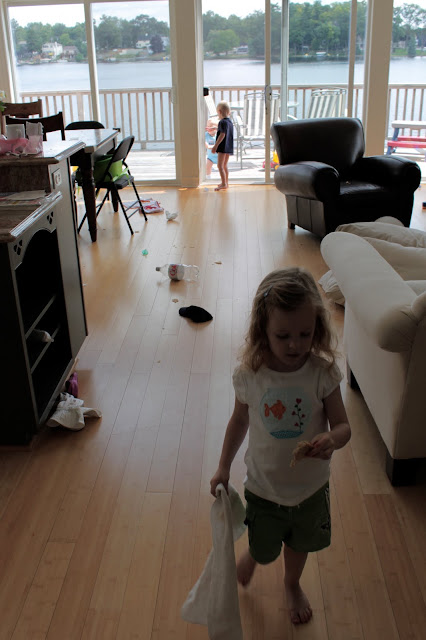 Without too much more destruction we made it to nap time and just as I shut their door, in my deep breathe of relief I took in an eye-watering smell and remembered Sawyer’s naptime mess that for some reason I had never been able to clean up.

Before I get them after nap I may give them a little while to chat, hopefully they will decide that the morning mutiny was enough and they will go easy on me for the afternoon.