You are here: Home / Crafts, Recipes and How To's / Nonviolent games for boys

Somewhere soon after his fifth birthday my sweet little Parker went from loving Dora and Diego to asking for Batman figures and wondering if we were going to let him see the Green Lantern (the answer was a big no followed by a long whyyyyyyy Mommmy?).

His interest in all of these new toys and characters was followed quickly by disregarding the five year-old friendly games he used to play online. Ever since, I’ve been in search of computer games he can play that include his favorite characters but do not include violence, words I’d rather him not repeat and instructions that do not involve pushing ten keys and navigating the mouse simultaneously.

Here are a few of our favorites: 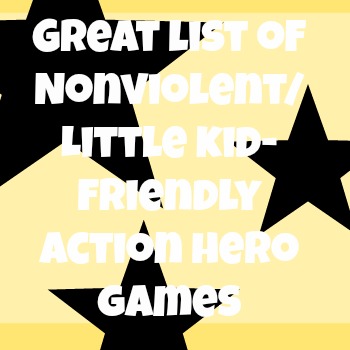 Batman Dress Up from Kidsgamesheroes.com– This is, by far, his favorite. The kids can change Batman into all of his past costumes or turn him into other action figures and can even change the Batmobile and background to match.

Batman Soccer also from Kidsgamesheroes.com– This games allows the kids to play soccer with their favorite action heroes and even use all of their special moves but it’s not full of the fighting and violence of typical action figure games.

LEGO action figure games from Cartoon Network– We’ve had decent luck with anything superhero/LEGO related. LEGO seems to keep their games and toys kid-friendly enough that they avoid the blood, guts and excessive violence in other games out there.

Jet Packin Princess from Aol Kids.– I like this one just for the title 🙂 but both my boys and my daughter like this game. A princess wearing a jetpack has to navigate the skies with the help of your kiddos.

Online coloring kit from Brothers games– Just like most online art programs but with superheroes, this coloring program lets the kids color their favorite superheroes without having to print a thing or get out the crayons.

Batman BMX from BatmanGamesonly.com– My favorite part about this game is that it starts out REALLY easy, even my three year-old had no trouble completing the first few levels. It gets a little more difficult from there but it’s just Batman racing a bike and doing tricks in and out of Batman scenes, great for the younger ones.

Do you have any more to add to the list? We’re always looking for something new.

On any given day you will find me taxi-ing a teenager, mopping up our latest "art project" and trying to remember when I turned the crock pot on… all the while, looking for the closest Starbucks drive thru.

We had so much fun practicing for a few years from

This youngest of mine is starting to look old like

The best riding instructors text you photos of you