You are here: Home / Crafts, Recipes and How To's / Costume Ideas for Suessical the Musical

Parker and I recently costumed Suessical Jr. I relied heavily on Pinterest to inspire my costume ideas. The end result was a colorful show that I was absolutely in love with. To return the Pinterest favor, here are all of our costumes and a little about how we created them. 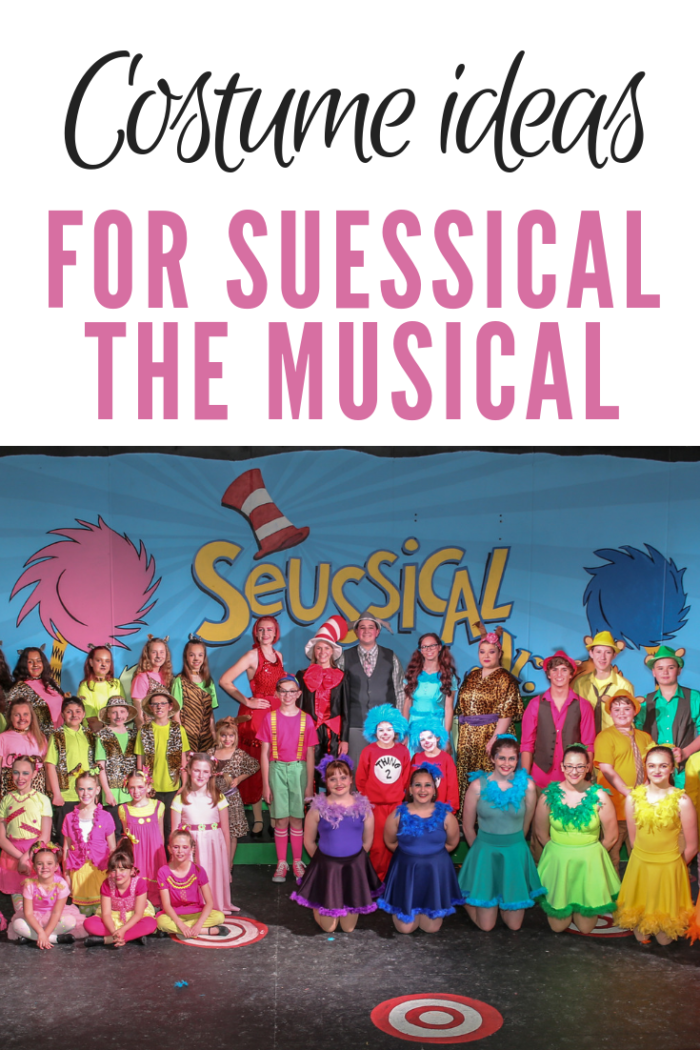 Mr. and Mrs. Mayor and the Whos

For these costumes I thrift-shopped like crazy and stuck to just a few main colors– pink, yellow and neon green. Whatever wasn’t decorated enough we adorned with buttons, rickrack and ribbons. Mr. Mayor, whose outfit was probably the hardest to find, is wearing a women’s yellow blazer and pink skinny jeans. Thrift shop finds as well! Mayzie and the Bird Girls

Mayzie wore a red jazz costume that one of the other cast members had worn in a dance recital. The Bird Girls are wearing regular leotards lined with feather boas from the dollar store. We bought them skater skirts in a variety of bold colors then dyed the leotards to match when we couldn’t find a good color match. For JoJo we had a pretty simple concept in mind. The hardest part was finding the right colors. I thrift shopped for his shorts and shirt then hit the jackpot at Party City for accessories. I found his knee socks, hat and suspenders there and they tied in the outfit perfectly!

We found some old costumes in storage that looked like maybe they were used for cavemen or Flintstone type characters. I wanted all of the Jungle Citizens in animal print but not necessarily exactly matching so I altered the costumes a bit. Some kept the “Flintstone” look and some we turned into skirts and boot covers. We also made wrist bands to compliment the dresses. I wanted the citizens in all black and animal print but the director insisted on brightly colored shirts so we paired the outfits that way. I still like my idea ;). For the Wickersham Brothers we went with khakis and dress shirts in bright colors. I lucked out again with their hats at party city. We attached monkey ears to the hats and found a few brown vests and ties at the thrift store and the Brothers were complete! I loved our Gertrude costume! We found a 50’s style dress on Amazon (link below) and trimmed it with feather boas. We also added feathers around her pigtails and socks. I’ll show you a separate tutorial for how we made Gertrude’s tail grown.

Horton was my favorite. I found a lot of inspiration for this one from Pinterest and just pulled in the details I loved. Gray pants, a gray vest and gray plaid shirt were all found at the thrift store along with a pink tie. Our Horton had his own gray fedora that was perfect for his costume so all we had to do was make elephant ears out of reinforced felt.